KELLAFRIQUE AND THE CELEBRATION OF WORLD ENVIRONMENT DAY

The World Environment Day, which is usually held on 5 June each year, has had a major specificity this year, namely that it was held in one of the largest polluting countries, but which is tackling this problem most closely with a view to finding a lasting solution.

In 1974, the United Nations Environment Programme (UNEP) chose 5 June as World Environment Day in order to denounce the countless abuses afflicted on nature, specifically by humans. In concrete terms, it is therefore a question of undertaking initiatives and other actions likely to preserve the balance of the ecosystem and ensure a better and sustainable life for mankind on earth.

Africa and the 38th edition of WED

In Africa, each State celebrated WED according to its geographical or cultural specificities. For example, Kenya celebrated the day with parades of famous designers, paying tribute to the environment and calling for its preservation; symbolic “tree planting” ceremonies were also held to encourage people to become enthusiastic about reforestation; as well as bicycle rides were organized to raise awareness about vehicle pollution.

In Cameroon, similar activities were organized in addition to cultural performances and art exhibitions. In addition, many schools have contributed to this by organizing internal activities such as “green campuses”, “organic campuses”, or conferences led by teachers, experts in the field, on the related theme.

What about KELLAFRICA in all this?

KELLAFRICA and the 38th edition of WED

The 38th edition of WED took place in KELLAFRICA in two parts: the preliminary organization of a round table with experts in the field, and subsequently a visit-party exhibition at the IFC.

With regard to the round table in advance, it was held at the KELLAFRIQUE premises with Mr. Gilbert LEKANE, UN-Habitat consultant and head of climate issues, as the main expert. For a good two hours, the panelist talked to his audience about the origins of the day, its causes, consequences, socio-political issues… Discussions followed which focused on the degree of responsibility of each other and specifically of States, industries and households in the disintegration of the planet’s atmospheric state.

The subsequent visit to the French Institute of Cameroon took place in the afternoon to take part in a photo exhibition on the environment, carried out by IUCN, and also to attend the screening of a documentary film that highlighted the causes, shortcomings and challenges of the destruction of the environment and specifically the ozone layer.

At the end of this WED, resolutions were adopted by the Kellafrique association, which undertakes to use all its legal means to fight against air pollution in a specific way, environmental pollution in general. In addition, KELLAFRIQUE says yes to environmental protection and is committed to raising awareness among more people. 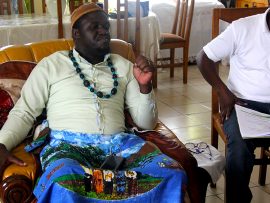